The Renewable Energy Target legislation requires wholesalers of electricity to purchase a percentage of the energy the sell from renewable energy sources.

In 2009, the Federal Government set the percentage target for renewable energy to 20% by 2020.

The mechanism used to measure the percentage of renewable energy an energy wholesaler purchases is structured around them surrendering certificates which can by purchased from solar energy system owners.

When a house or business installs a solar system, the amount of greenhouse gas emission abatement is estimated by an algorithm set by the regulator of the scheme.

The variables in the algorithm are fairly simple. They break up the country into four zones. Each postcode in Australia has been assessed for how much solar energy and is classified to be in one of the four zones.

Below is a map of the four Zones. 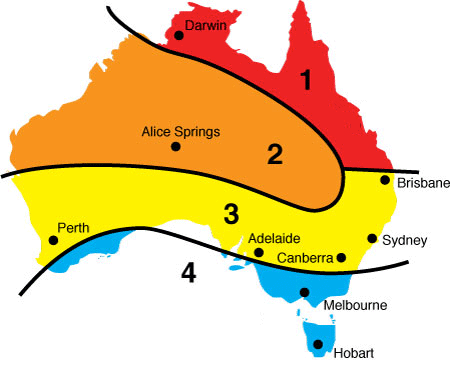 The equation for calculating the quantity of Small Technology Certificates (STCs) for a 5kW system in Zone 3 is calculated as follows:

The #STCs is always rounded down so final number is 103 STCs.

Tindo will offer a point of sale discount if the system owner agrees to assign the STCs to Tindo.

Large Generations Certificates (LGCs) are for solar systems greater than 100kW in size.

The method of measuring the quantity is LGCs generated is straightforward as a regular electricity meter is placed on the output of the solar system capturing all of the generation.

Periodically, the energy recorded on the meter is collated to represent LGCs.

Buying and Selling STCs and LGCs

The Goverment has set up the REC Registry to administer the buying and selling of STCs and LGCs.

The REC Registry is an internet-based registry system that supports the Commonwealth Government’s Renewable Energy Target (RET) by facilitating the creation, transfer and surrender of certificates.