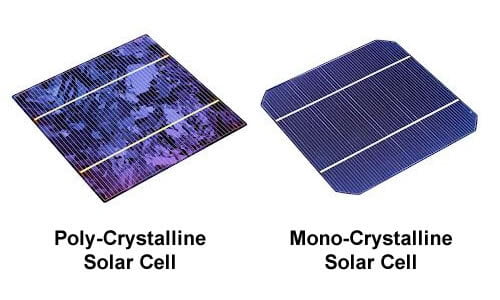 Lets say you have a 1kW of monocrystalline solar array on the same roof and side by side with a 1kW of polycrystalline array.

However, the 1kW polycrystalline array will generally generate more electricity over the year when compared to the 1kW monocrystalline solar array because of its better temperature tolerance.

However, the colour of polycrystalline cells has darkened significantly the past few years and it is now looking a lot darker then it used to.

How They are Made

It physically looks like a grey 20cm round rod.

The rod gets cut into wafers and then the round wafers are trimmed to make them more square so they can be arranged nicely on a rectangular piece of glass.

To make polycrystalline wafers, molten silicon is poured into a cast where it cools and solidifies.

The rectangular block of silicon gets cut into 156mm square wafers so it can be arranged neatly on a rectangular piece of glass.

You can tell the difference between a mono and poly panel because of the darker colour of the mono cell, and also the mono cell generally are not perfectly square as they started off in life as a round wafer.