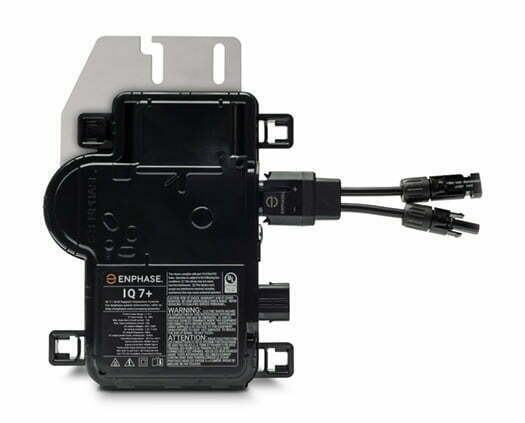 A micro inverter is a small inverter (as the name suggests)

With Enphase micro inverters, you’re in control, and that’s a powerful thing. You can manage your own energy and be energy independent. But none of that matters if it’s not safe. That’s why Enphase is built from the ground up with safety in mind.

When series connecting solar panels, the string of panels work as well as the weakest panel in the series string.

If you have 12 panels wired in series, and one panel is under-performing for some reason, then the entire series string will be dragged down by the under-performing panel. An analogy to this is a garden hose. If you step on the hose in one place, the flow is reduced for the whole system.

A panel can under-perform because of many reasons such as:

– it is ageing differently,
– it is shaded by a smell pipe, chimney or tree
– it is dirtier than the other panels

However, when installing a micro inverter on each panel, this means that each panel in the 12 panel array is maximised and managed independently of its neighbouring panel.

This is the single largest factor that results in the extra electricity a micro inverter system generates when compared to a regular inverter.

Because a DC string inverter has strict requirements around how many panels can be connected together and which directions they can face, designs are limited and this can be an issue for houses with odd shaped roofs or small awkward angles. A micro inverter system can be using in any combination of panels and arrays that fit the space without compromising the output, opening up more roof space for solar than a traditional DC string design.

Traditionally houses with shade were unable to consider solar as even small areas of shade on a DC string array will be replicated down the entire string. This is not the case in a micro inverter system where the shade is localised to a single panel only.

This video shows the power of a micro inverter array in minimising shade issues. 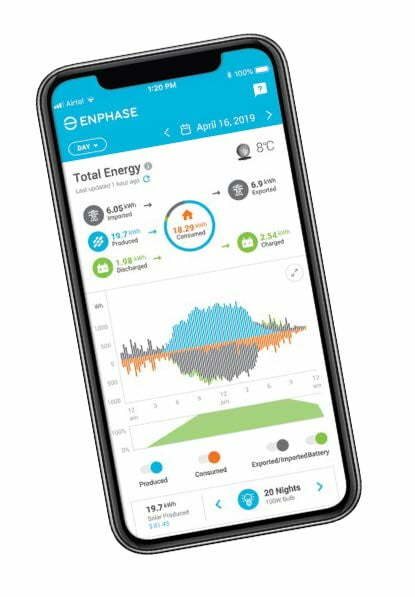 A conventional string inverter usually has a single digital display which tells you how the single inverter is performing. Some systems offer external options for connecting systems to the internet but this is rarely included free of charge.

A single app for everything

With the Enphase MyEnlighten app, you can track your energy production, monitor your system’s health, and share your data with family and friends, all from a simple, easy-to-use interface. It is like your banking app, allowing you to monitor and make the most your solar investment.

This means you can keep a very close eye on your investment – from anywhere in the world where there is an Internet connection.

Enphase is obsessive about quality and stands by its products with the industry’s strongest warranties. Enphase microinverters come with a 10-year warranty as standard, with options to extend coverage to 15, 20 or 25 years.

This is because a micro inverter with its extra low Voltage is a much simpler device with vastly fewer components compared to conventional inverters.

When each individual panel has a micro inverter, the DC Voltage of the array is less than 50V DC.

This is classified as Extra Low Voltage.

A conventional inverter can be wired at up to 1,000V DC which needs to be treated extremely carefully as it is a lethal Voltage.

When a system owner switches off the circuit breaker in the main switchboard of a house or business, a micro inverter no longer sees mains power and it automatically switches off.

However the DC Voltage between the panels and the inverter is still live. In the case of a micro inverter, the Voltage is only 50V DC – Extra Low Voltage.

It is costly, limited and complicated to expand a conventional inverter as special consideration of series-parallel combinations is required along with a utility area for the inverter.

A panel with a micro inverter can be expanded one panel at a time.

The system owner can start with a single solar panel and then expand as little or as much as they like as their needs and budget changes.

If a conventional inverter breaks down, you generally lose your entire solar system until the problem is fixed. Most customers won’t realise this until their next power bill and they see the extra money they are being charged due to lost production. This is often in the hundreds of dollar.

With a micro inverter, there is no single point of solar system failure.

In the event of a micro inverter problem, you don’t lose a big chunk of your solar system. You only lose a single panel.

AC Modules take the concept of micro inverters to the next level.

An AC Module has a factory fitted inverter on the solar panel itself.

It is earthed and tested as part of the panel and is faster again to install making it the ultimate solution for the installer and the system owner.

It is a single box instead of multiple inverters, but you do have to find a location for this unit.

Micro inverters do claw back the gap through simpler design, installation labour and simpler electrical hardware.

It is also important to take into account the longer warranty, redundancy and peace mind of Extra Low Voltage.